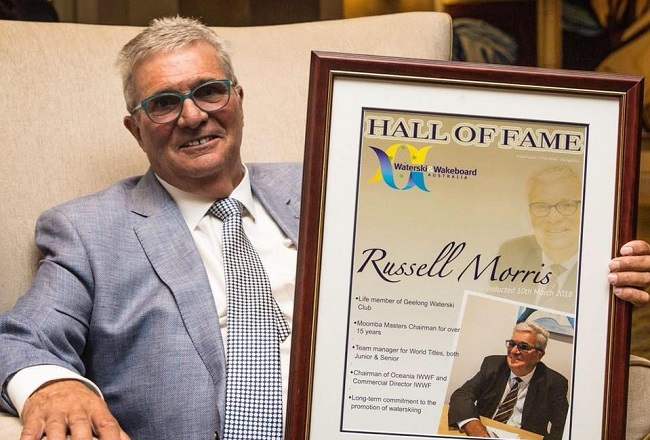 The sport of water skiing has lost a great man who participated in water skiing for many years in an administrative and competitive roll, Russell Morris will be remembered by many water skiers throughout the World of Water Skiing.

His involvement commenced as a skier with the Geelong Water Ski Club in the 1960’s and a member of the Victorian Water Ski Association from then on. He was involved in many administrative duties, President with the International Oceania Group—delegate with the Australian Water Ski & Wakeboard Federation. Russell made his mark with the International Invitational Moomba Masters Championships, held on the Yarra River Melbourne Australia with a total commitment from himself for 11 days and nights  presentation of water skiing activities in conjunction with the promotion of the festival conducted by the City of Melbourne each March.

He will be remembered as a gentleman and a supporter of all water skiing  activities. We thank you Russell for your continued support over the seasons for the Victorian Water Ski Association and Moomba Masters.

Our deepest condolence to Lorraine, Sally, Andrew and Joy and family members, also the many water ski friends he made over the years.
President D. Robertson, Secretary F. Hynes Directors and members of the Victorian Water Ski Association, Moomba Masters we applaud you